Keeping a sketchbook allows a designer or illustrator to note down ideas, lists and interesting findings, as well as record what they see and collect which inspires them in their work and everyday thoughts. When we see something that captures our imagination, such as an interesting building or a scene we see happening, we feel the need to remember it and so recording this is the best way to do so. Photographers may take a quick snap shot, illustrators or designers may sketch it or write it down and brainstorm ideas from this. We also may find things such as train tickets, leaflets or food wrappers which we like, and want to keep for future reference as they inspire us in either being well designed, imaginative or may just simply be attractive. Things we like are very likely to inspire what we create as we aim for a certain style for our final outcome to be like.
Director, graphic and moving image designer Johnny Hardstaff collects all sorts of information graphics, stickers, images, examples of artworks and then uses these as inspiration or reference for his designs, sketching along side these in his sketchbooks, drawing from these shape, colour, texture, layout and concept.  "Amongst his most notable works to date remain 'History of Gaming' and 'Future of Gaming' (two politically provocative short films designed to first engender then test corporate patronage, now inducted into the National Film Archive), the Radiohead film 'Like Spinning Plates' (long format two track experimental music video), a contemporary raft of innovative design based commercials (Sony / Asics / Orange / MTV etc) and the 2010 future noir short film 'DarkRoom'." 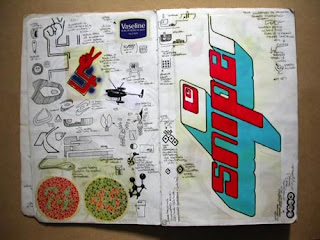 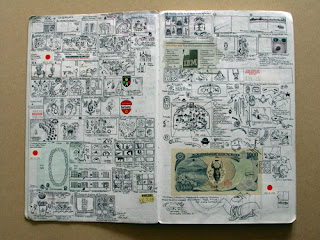 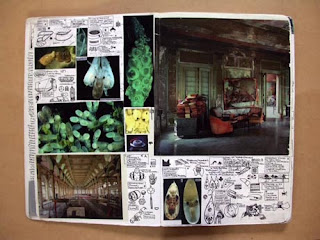 http://www.johnnyhardstaff.com/index.php?menu=yes&section=sketchbooks
Simply recording what we see by sketching it is a useful exercise to improve our drawing skills and encourages us to look at the world around us, taking inspiration from this while learning about perspective, form, shape, texture and colour. We can then also experiment with different media to then translate into our work these initial ideas and research. I have selected a few videos showing sketchbooks by artists and designers which I find interesting. They show the thought processes and experimentation of their work, the development of a style and how they see things, then interpret them into a new visual representation for recording.
http://www.youtube.com/watch?v=ojJGp5HX-Bs&feature=player_embedded
http://www.youtube.com/watch?v=c9TiB0aYIlA&feature=related
http://www.youtube.com/watch?v=ECu4nQGysT8&feature=related
http://www.youtube.com/watch?v=RuPgOg83I4A&feature=related
http://www.youtube.com/watch?v=b_5kRhNoOIY&NR=1
http://www.youtube.com/watch?v=34NH_Vl2ry0&feature=related
If a designer or illustrator needs to create a piece of work about a certain topic, they would need to research into different aspects such as the history and context. Information is needed to gain a greater knowledge of what we see so that we can understand something and therefore draw or design it well. Reading books also helps with vocabulary in order to describe, as well as allowing a designer's imagination to expand and give them inspiration by creating a visual for their initial ideas about a subject. Secondary research allows us to expand our knowledge using what other people have found and collected, then put together to make it easier for us to find the information such as in a book or on the internet. When an illustrator or designer is looking for inspiration, they may look at other artist's work and their style as way of working as an influence as to how to go about doing a new piece of work.
A designer may look at how colour can be used to attract attention to their piece of work, or how it has an impact on who the audience is. For example, a children's illustrator would need to research the stages of development in reading and learning to produce a book for younger children, as well as how to use colour well so as to attract their attention. On a page of Johnny Hardstaff's sketchbooks, he has researched colour blindness tests to see how colours interact with one another so he can use this in his work to produce a striking visual.
In his sketchbooks he has also taken images for visual reference from which to draw from so that he can get a sense of colour, shape and form.
Posted by Emma Quirk at 14:54