"The Bauhaus was a German art school which existed from 1919 through 1933.  No other institution has had the profound influence on 20th century design as the Bauhaus.  It was founded by architect Walter Gropius in the city of Weimar.   Founded on the principles of the Arts and Crafts movement, the aim of the Bauhaus was to incorporate art and industry. In 1925, the Bauhaus moved to Dessau.  It was during this year that the young Austrian artist, Herbert Bayer, was appointed to head the printing and advertising workshops in Dessau." (http://www.type.nu/bayer/index.html)
'The new typography' was a huge influence on modern graphic design, being all about functionality and purpose, which meant being legible was its only aim to convey the message. The pleasing aesthetic was a by-product of this clean, straight forward approach in the early 20th century.
Herbert Bayer's poster for Kandinsky's 60th Birthday: 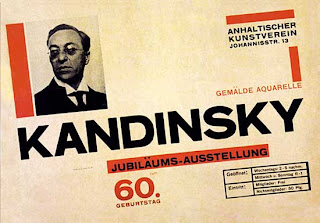 This piece uses bold, black type against a cream background and minimal use of colour. First of all, the typeface he has used is large enough to be seen from a distance, apart from the smaller details which would be legible of course from up close when the viewer has already been attracted by the poster. The contrast of black on cream, and black on orange gives a striking visual as the colours vibrate. Most of the text is in capital letters, which causes it to be harder to read, however it is in keeping with the block, grid format of this piece.
"The metaphor of “transparent type” was coined by Beatrice Warde, Monotype Imaging's famous marketing manager of the 1930s and 40s. She once wrote in an article that good type is like “a crystal goblet” which allows content to be more important than the container. Warde contended that the best types do not get in the way of the communication process: these faces are virtually invisible and allow words to make the statement–not the type." (http://www.fonts.com/AboutFonts/Articles/Typography/Legibility.htm)
"Helvetica was developed in 1957 by Max Miedinger with Eduard Hoffmann at the Haas'sche Schriftgiesserei (Haas type foundry) of Münchenstein, Switzerland. Haas set out to design a new sans-serif typeface that could compete with the successful Akzidenz-Grotesk in the Swiss market. Originally called Neue Haas Grotesk, its design was based on Schelter-Grotesk and Haas’ Normal Grotesk. The aim of the new design was to create a neutral typeface that had great clarity, no intrinsic meaning in its form, and could be used on a wide variety of signage." (http://en.wikipedia.org/wiki/Helvetica) 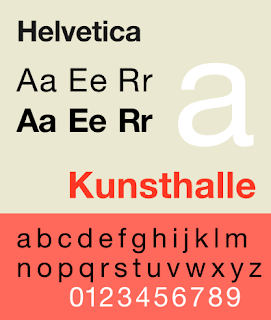 This logo is extremely legible with its helvetica "crystal goblet" font and striking blue and red. On top of white, the colours convey the red blue and white american flag colours but also are made all the more legible. Even though the words are not spaced apart, the difference in colour distinguishes them from one another allowing us to see it as two words.
Stefan Sagmeister's poster for lou reed's set in the twilight reeling 1996 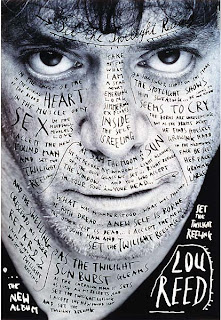 His use of hand rendered type adds a unique quality but is not entirely legible. However, information which is needed for the viewer to understand, such as the name and title, is legible enough. The rest is simply lyrics and therefore their communication is not as important but is instead simply for the aesthetic quality.
Posted by Emma Quirk at 15:03