Drawing
In visual communication, the final outcome must be planned in detail. Designers will often first do rough sketches to put their ideas onto paper, then work out various aspects of the design such as position, angle, shape, text, layout and content in these initial drawings.
Johnny Hardstaff, a graphic designer and animation director, has a large collection of sketchbooks containing his pre-production sketches and ideas. In these, he takes inspiration and reference from images he finds to work out shape.
He also plans out the sequences in a story board style in order to work out the order of imagery, movement and makes notes to help design. 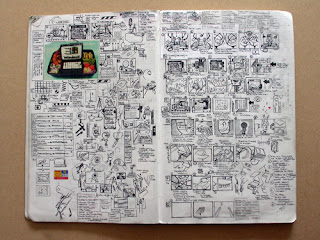 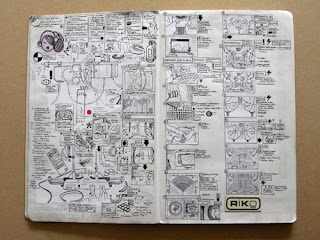 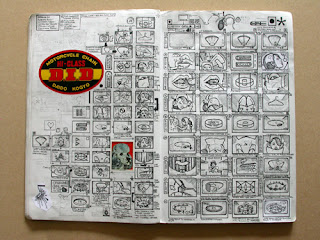 In animation and moving image, storyboards help to not only plan the sequence of events, but also the environment, camera angle, position and movement of characters, and even lighting. This part of the story board from Disney's Dumbo feature length animated film shows the interaction of the two characters; Dumbo and his mother in a sequence where he learns to walk and explore in his first few moments after being born. The artist uses faint line drawings as well as bold mark making in pen, with some shading to indicate the light source, style of character design, movement, surroundings and interaction by the characters. A whole film would be planned out in this way, to show the initial idea visually; which is far easier for the team to understand than in note form. In film, the sequence is then shot using this as a guideline. With drawn animation, it is even more important as it can give a sense of illustration style and movement to help the artists who will draw up the final frames.
Initial ideas are easier to expand on when they are drawn, and a lot more can be explained with a simple image. For example, the mark making on the part of the image where Dumbo has fallen shows that he has fallen over using simple expressive strokes. 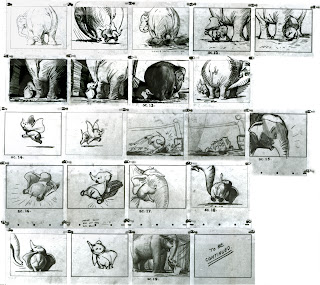 Left and Right brain In Design
The brain can be described as being in two halves: the left side and the right side. Different types of signals and messages are transmitted to each side which controls certain actions. The left side is said to be more organised, analytical, logical; the decision making side. The right hand side, however, is the more playful, experimental, creative and emotional side; being more child-like and free.
In design, we use the two halves together to create something inspired, yet useful and meaningful. First, we experiment and play with colours, shapes, content, and we are more spontaneous. Then, to put this into a context, we use our left side of our brain to analyse what we have made, evaluate what would be useful and ask ourselves how we can clarify this, choosing parts of the creation to help with how we convey the message.
An example of the right brain is in this piece of experimental drawing by Jason Devine, he plays freely with marker pen straight on top of the pages of a book with no hesitation. His lines are untidy, spontaneous and child-like. The shapes and characters seem to be quite random without much thought, no context and not in any particular style. The colour is applied seemingly without much reason and the shapes are simple and playful. The type is quite freely drawn, but does have some thought behind it, and then he has added small swings onto the letterforms to give it a play on words.  More of his sketchbook work can be seen at this address: http://www.jasondevine.net/sketchbooks.html 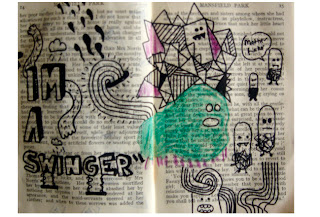 In contrast, this page of a typography sketchbook by Claire Coullon shows her approach at designing a lowercase letter 'a'. Her lines are careful and far less confident than the previous example. The shapes in type must be thought out to fit with the rest of the letters and must also work and be legible. She has annotated her work, analysing which parts she feels work, and which do not, in order to re-design and adapt them.
The left brain is the part of us which looks at our work and criticises it so that we can improve and make sure we produce a final outcome which best answers what we set out to make. 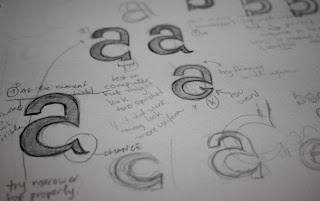