Moving image: 3 acts structure
"Every movie needs to have a beginning, a middle and an end, but not necessarily in that order"- Jean-Luc Goddard.
The three acts in a film are made up of these parts. In the first act, the scene is set and at the end, the protagonist makes a commitment which leads to the events of acts 2 and 3. 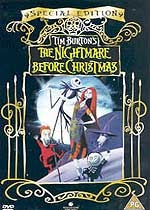 The Nightmare before Christmas (1993), the first full length stop motion animated feature film, was directed by Henry Selick, and the story and characters were written and designed by Tim Burton.
This film tells the story of Jack Skellington and Halloween Town, and how he discovers Christmas with the ambition to make it his own.
In the first act of this film, a narrator sets the scene with the idea of there being portals into different worlds, introducing Halloween Town. The mood, setting and characters are shown through their celebration of halloween in a parade. Jack Skellington, the pumpkin king is the main character and also the main focus of this excitement at the beginning as a performer. This is the status quo and the original equilibrium of the story. Next we are taken into his own thoughts with a soliloquy which explains his feelings of boredom and need for change. This leads on to him stumbling into Christmas Town where he discovers the new holiday and is in awe of these new feelings. He commits the the idea of finding out more about this new land and aims to educate his town in hope to share his delight. This results in a misunderstanding and sets up the story for a sequence of events in which his exploration will go horribly wrong.
In 'the middle' part, act 2, Jack conducts scientific experiments in order to explain this new feeling he has about Christmas and to learn more. Frustrated, he becomes disheartened, but then comes up with the idea to make christmas his own and do the job of Santa himself. This leads on to the whole town being involved in the take over; making presents and setting him up for disaster. The nature of these characters is revel in horror, fright and all things dark which is the complete opposite of the real meaning of Christmas. Jack has Santa kidnapped and is left in the hands of Oogie Boogie, the antagonist who tries to kill him. Sally, the Frankenstein's creation type character tries to warn Jack that this will all end badly. He does not listen and delivers the presents, which begin to attack the people of Christmas Town.
In act 3, the ending, the problems are resolved when the Christmas Town people attack Jack, and get rid of the dangerous toys. Sally saves Santa and Jack comes to his senses, being defeated. He realises that although he wanted adventure, it was not who he really was and is once again happy with a renewed love for his scaring nature. This is the new equilibrium: everything is back to normal but he now feels fulfilled again.
Also, 3 act films tend to have an 'inner story', often involving a romantic part to the story. In this film, Sally is in love with Jack, but he is too involved in his adventure to notice. She looks out for him, but not until the end do they realise they are meant to be together, as Jack's renewed state of mind allows him to notice her.
Character design: Jack Skellington 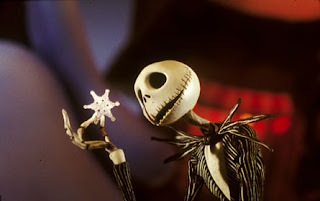 The protagonist of the this film, Jack is the Pumpkin King of Halloween Town; a celebrity performer who is loved by all his fans for his ability to scare. The whole film is stop motion animation using hand crafted characters, designed by Tim Burton. His eerie style and dark designs portray Jack as a skeleton, tall and thin with extremely long limbs, wearing a pin stripe black suit with a bat shaped collar. His face is full of expression despite being only made up of two hollow eye sockets, two small nostril holes and a wide, half sewn up mouth and jagged teeth.
Initially, he seems like a confident, extroversion character. However, his soliloquies reveal his sense of loneliness, boredom with the 'same old thing' and a need for adventure, in search of self discovery, showing his curious side. His exterior seems hard yet his interaction with others and passion portrayed through dialogue, animated, expressive movements and facial expressions allow us to see a deeper, emotional side to the character to make him believable, almost as a human character.
Initially, he finds an interest and means well by trying to share it with others and has ambitions of trying it himself. When it all goes wrong, his real self shines through as his nature, being from halloween town, is to scare and create terror, which is his realisation at the end.
Posted by Emma Quirk at 19:49