Interpretation of Walt Disney's Mickey Mouse
The Disney icon Mickey Mouse, recognisable all over the globe, has changed a lot over the years from it's first appearances in 1928 in 'Steamboat Willie'. His lines were expressive, hand rendered and simple, as were his colours bold, with minimum highlights and shadowing. His face was white, his eyes flattened black ovals, and his ears were small disc shapes, half the size of his head. 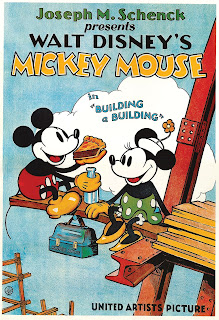 Later, developed the classic style we are more familiar with, seen in feature-length animations such as Fantasia, released in 1940. His character is adapted with new clothing such as the sorcerer's gown and hat, and his face becomes more expressive. His nose is given extra creases, his face is now pink, skin coloured, his eyes now are wider with white around and black pupils, his mouth is more of a pink tone, looking more realistic, and his hands are also more human-like, as well as having white gloves as apposed to yellow in the earlier illustrations. The shape of his face is also more sleek and streamlined, and his ears are much larger. His clothing has more colour and tone, giving him life. Graphic styles had become much more commercial and sleek, in accordance with mass production and the wide spread popularity of Disney Productions. This new style gave Mickey Mouse a lot of character and paved the way for commercial potential within the brand and illustrative style of animation. Newer versions, still hand-rendered, have also been given more highlight and shadow to add to the life-like effect. 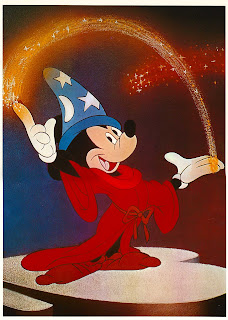 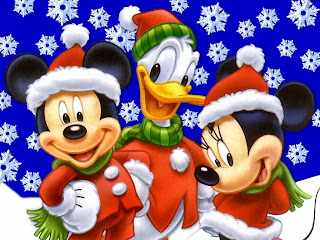 Since these initial interpretations, the general colouring and shapes have stayed very similar, however since the introduction of recent modern computer software, the commercial Disney and beginnings of CGI, new 3D style animations have given Mickey a new dimension and a shiny, plastic effect. Animations with this new style have been faster and easier to produce than the illustrated stop motion originals. This modern interpretation is often used on Disney merchandise for Mickey Mouse and many other Disney characters. 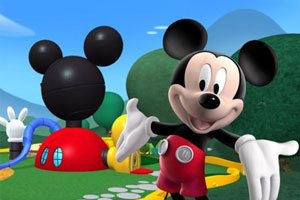