Disruption is the (usually deliberate or intended) interruption of normal work or practice.

Paraty: equality, as in amount, status or value.
When every company or agency jump on the band wagon, the market comes into a state of parity.
When someone disrupts this with something new, they get noticed, and so become more successful, bringing more business.
Then they all jump on that new band wagon, and so the cycle carries on.
But how do we stand out from the crowd and use this as a business tool?
We have to be original. In order to do this, we must first research what the competition is already doing, then ask 'better questions'. Why is the industry how it is? How can we change or challenge the way we look at it? How can we change the consumer's view of it?
We have to make an emotional connection with the audience. This is why funny adverts are memorable, along with sad, moving ones, such as charities.
They way we use media can also be challenged. For example, the tippex viral ad is very memorable as it is funny, interactive and challenges the way we use viral ads and media.
The new coding which allows the character to interact with the advert next to it, for tippex, is surprising and clever, as is a progression in the way viral ads are used in advertising. The viewer can then interact with it and type in whatever they like and choose where the story goes.
Another way of challenging conventional methods of advertising is guerilla advertising. This involves using the environment and context to take the consumers by surprise and create a memorable experience.
in 2005 3M came up with a unique ambient ad campaign in Canada to promote its 3M Scotchshield security glass. 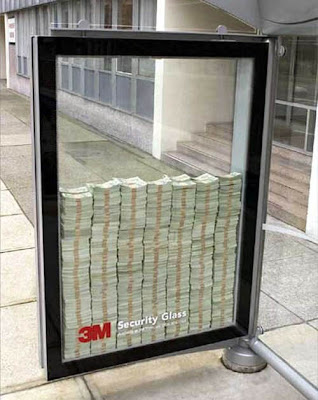 The company modified a Vancouver bus shelter ad and filled the unbreakable postersite with stacks of play money, and 500 real Canadian dollars on top to lure Canadians to take an attempt to lay their hands on it by breaking the glass. The idea clicked and many attempted fruitlessly to get access to the banknotes. However, the glass remained intact.
The remarkable idea, created by Rethink Communications, not only gained the public’s attention, also newspapers, tech- & ad blogs and a local news station covered the stunt. Now three years later The Ladders, marketleader in $100K online recruitment, takes 3M’s unique idea one step further …
TheLadders, a popular site (with 2 million members) for job seekers for executive positions that pay more than $100K a year, conducted a social experiment in July in New York, to target recruiters at Fortune 1,000 companies.
To make a point to employers about the kind of attention $100,000 can attract TheLadders placed a stack of $100,000 cash (unguarded), protected by a clear shatter-proof plexiglass case, in Columbus Park in Brooklyn and 10 hidden cameras to record the public’s reactions.
Some observers did the classic double-take, while others were so mesmerized that they could only stare and comment and a few attempted to knock the case over. The ad closes with: “The conclusion? $100,000 will attract a lot of people. TheLadders.com helps you attract the right people.”
Nobody succeeded to break the 3M security glass, but some people did at TheLadders experiment: “We did see a good amount of violence and vandalism, at one point six guys got together tipped it over and it smashed, and the security guards jumped into action.”
This just shows how some businesses can take a new, effective marketing idea, turn it around to fit their marketing needs but fail or have it be less successful because it was not initially moulded to fit their own brief.