( used with a singular or plural verb

) a system of moralprinciples: the ethics of a culture.
2.

the rules of conduct recognized in respect to a particularclass of human actions or a particular group, culture, etc.:medical ethics; Christian ethics.
3.

moral principles, as of an individual: His ethics forbadebetrayal of a confidence.
4.

( usually used with a singular verb 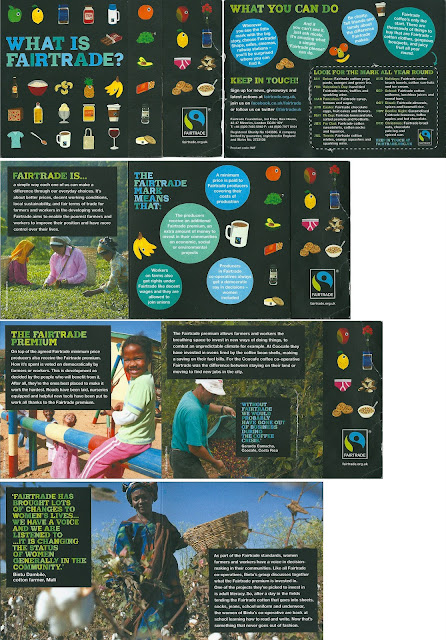 This fair trade leaflet: This design is attractive and informative, not 'in your face' about beliefs on human rights.
My views on these topics:
I believe that the law covers just about everything that is wrong. Charities and campaigns cover those things which I am on the fence about. Fair trade is great- but is one of those cases where the law has been loopholed so that they weren't getting what is obviously their rights to begin with.
I am undecided on organ donation- I believe it is a practical idea and is a great for those who benefit from it, but I am not sure about wether I would like to be cut up after I die; I suppose it is in the same vein as wether I would want to be buried or cremated.
Animals:
cosmetics testing: against (but I don't go out of my way to buy products which reflect this belief- most companies do not test on animals these days anyway).
Fur: My grandmother had a fur coat- it is in my mum's wardrobe. I don't think I would ever wear it though. This is not because it came from an animal, however, but because it is old, second hand, and very expensive! I'm not saying it is okay to hunt, cut up and wear animals, especially seeing as we have so many synthetic alternative now compared to pre-historic times, even compared to 50 years ago. I simply believe that if somebody wants to go and kill an animal for this purpose then I cannot physically stop them. Perhaps through communication, I could offer alternatives, but telling somebody they are wrong when they do not see it already, in this case, Is potentially falling on deaf ears... or in terms of visual communication: falling on blind eyes.
Meat: I have no problem eating meat. Calling venison 'Bambi burgers', you think would put me off, but no. If I felt so strongly about not eating meat, I would be a vegetarian by now. I do think, however, that the way in which animals are bred, looked after and killed should done in the most humane way possible, with the least amount of pain and distress.
Halal meat:
http://www.bbc.co.uk/religion/religions/islam/islamethics/animals_1.shtml
This article from the bbc says that muslims slaughter animals in a way they believe to be humane- by slitting the throat and allowing it to bleed to death. It also says that they must treat the animal well and not let it feel any discomfort. It is argued that this method is very inhumane as the animal stays conscious long enough to feel severe pain. Some argue, however, that they do not. Recently, they have begun to stun the animals so that they are not conscious when the slaughter is performed.
Really, I will not be able to make my mind up on this until I hear what the animals have to say... but at the moment I do think that letting an animal bleed to death is definatly inhumane.
If a law does not state what is right and wrong on a topic, then any religion will. For those who do not follow a certain faith, they are able to make up their own minds on such subjects.
I believe that I take a practical, logical view on ethical matters, in that whatever has benefits must be the right way, or if it seems natural or fair, there cannot be a problem with it.

The death penalty: I am still undecided on this, as it is such a big topic. So many factors have to be taken into account when deciding wether it is right or wrong. A gut survival technique would be saying, if someone murders, then they should be killed in order to protect others...

but what about the executioner?